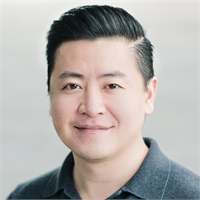 Eric has been active in the financial industry since 2016 and has joined the firm early in 2019.  Eric spent a period of time as an intern here at the firm and continued his development as an IAR at a local broker dealer.  He provides comprehensive financial planning as a vital part of our team along with being our lead product researcher.

During his downtime, you can find Eric out on the golf course or at the driving range working on his swing.  During the NFL season, most of his Sundays involve watching the Seattle Seahawks; and come early April, he enjoys watching the NBA playoffs.  Aside from sports, he enjoys spending most of his free time with his family.  His wife – Jane, his two teenage boys – Jacob and Jonathan and his 5-year old daughter – Ali, all enjoy family game nights; which include games such as Monopoly, Jenga and Go Fish.